The Democratic nominee for Senate in Tennessee, Phil Bredesen, has agreed to participate in four debates with his opponent Marsha Blackburn. Unfortunately, Marsha Blackburn is just too busy.

Abbi Sigler, Blackburn campaign spokeswoman, gave me this statement today about the decision: “Unfortunately, the Rhodes College debate does not fit our schedule.”

Now, what do you suppose could be keeping Marsha Blackburn so busy? She currently serves in the US House of Representatives, which has exactly one thing on it’s schedule for the Month of September, a hearing on September 4th:

The debate she spurned was to be held on September 13:

So, why couldn’t she fit that into her schedule? I think I have an idea why:

Marsha was ready to co-sponsor her first piece of legislation: a bill to Prohibit lawsuits against manufacturers, sellers, or trade associations of food products in federal or state courts in regards to injury caused by a person’s consumption and weight gain, or any associated health issue, except in cases where there is a violation of previously established laws or acts governing food products.

And with this first co-sponsored bill, Marsha Blackburn began what has been a 15 year odyssey in doing any and everything she can do to choose corporations over people. The list is long, so be prepared.

Marsha is too busy for the people of Tennessee, but I’m going to go out on a limb and guess she is not too busy for any corporate executive that would like to meet with her to give her some campaign cash in return for some favorable votes.

Her opponent Phil Bredesen, on the other hand, served as the Governor of Tennessee for 8 years in which he did, among other things, the following for the people of Tennessee:

During his first term, Bredesen enacted a number of measures aimed at improving education. In 2003, the state established the Tennessee Lottery to fund college scholarships for the state’s high school graduates.[3] Teachers’ pay was raised above average salary in the Southeast, and Tennessee’s pre-kindergarten initiative was expanded to include a statewide program for four-year-olds. Bredesen created the Governor’s Books from Birth Foundation, a statewide expansion of Dolly Parton’s Imagination Library that offers free books for children, and in his fourth year, he signed legislation that increased funding for education by $366.5 million, much of which came from savings due to TennCare reform.[3]

To attract new industry, Bredesen worked with the General Assembly to reform Tennessee’s worker compensation system (changes supported by the business community and opposed by trial lawyers),[3] and invest in programs to help laid-off employees develop new skills. During his tenure, 2,889 companies, including Nissan and International Paper, expanded or moved to Tennessee, bringing more than 104,000 jobs and $12.8 billion in new business investment to the state.[16] 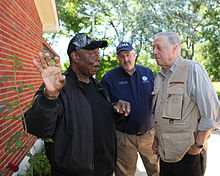 Bredesen launched a war on methamphetamine abuse, focusing on treatment, prevention and public awareness, with the Governor’s Meth-Free Tennessee initiative. Criminal penalties and resources for law enforcement were also enhanced as part of this program, which led to a 50% decline in illegal and toxic meth labs.[17] In 2005, Bredesen signed legislation establishing the Tennessee Heritage Conservation Trust Fund, which increased the state’s land-buying power in hopes of protecting ecologically significant land and conserving or restoring historically significant areas.[18]

Seems Phil Bredesen actually has a history of representing the people of Tennessee. No wonder Marsha doesn’t want to debate.

Instead, she will just rely on the out-of-state Koch brothers to do her debating for her:

The conservative political arm of the Koch network is launching a $2 million ad buy against former Democratic Gov. Phil Bredesen, signaling a major investment by the group in Tennessee’s U.S. Senate race this fall.

And they won’t be debating honestly, that’s for sure:

While the ad charges that Bredesen supported “higher gas taxes, sales taxes and more,” neither the state’s sales tax nor gas tax increased during his tenure.

Annual “technical corrections” bills that sought to close corporate tax loopholes and increased other taxes and fees passed the legislature with bipartisan support each year during Bredesen’s administration.